This website has been optimized for viewing in a modern web browser. For the best experience, switch to the latest version of Firefox, Safari, or Chrome.

2022. It was kind of a weird one. A return to a “new normal”? I felt like I was dipping my toes back into the world again, and constantly questioning how far I should go in. But I'm leaving the year with a lot of pride in what I accomplished...hmmm, no. A better way to say it would be what I am proud of what I started. Here are my top three starts of 2022.

1. Completing enough races to qualify for guaranteed entry into the 2023 NYC Marathon #

I started running a little bit in 2021. I had never been a runner before. In fact, I always hated it after spending a season on my Junior High track team to try and get closer to my crush who was also on the track team (it didn't work). At the end of 2021, I was so tired of trying to work out in my small studio apartment, and didn't feel comfortable going to in person workout classes yet. I live near Central Park and I decided to try a running group. It was outdoors, close to home, and would put me around humans again. I signed up for a Fundamentals Group Training program with New York Road Runners (NYRR), the organization that puts on the NYC Marathon as well as dozens of other races throughout the city during the year. The coaches made running feel very approachable as a newbie. One of the coaches told me about the Jeff Galloway Run-Walk method, and that made the idea of running a marathon something that didn't sound like complete torture. Essentially, you run then walk at a certain time ratio the entire race. Lately I've been running for 2 minutes, then walking for 1 minute and it has greatly increased my endurance. Jeff Galloway says:

I like how running allows for a lot of different types of goals and it's totally up to you what your goal is. Maybe you are running a race to try and improve your speed, maybe it's to run the whole way, or to just finish the darn thing. And every race can have a different personal goal. But no matter what the goal, every run feels like an accomplishment, and many small wins grow into something bigger over time. Consistency over intensity.

At the start of 2022, I decided to try and complete the NYRR 9+1 Program, where if you run 9 qualifying races and volunteer to work at one more within a calendar year, you gain guaranteed entry for the marathon the following year. There's also an entry lottery for general applicants like myself, but it's very competitive. I read on a message board that only 5%–10% of people who enter the lottery get in. I thought, if I can do 9 races this year and not hate it, I'll try to run the marathon the following year. 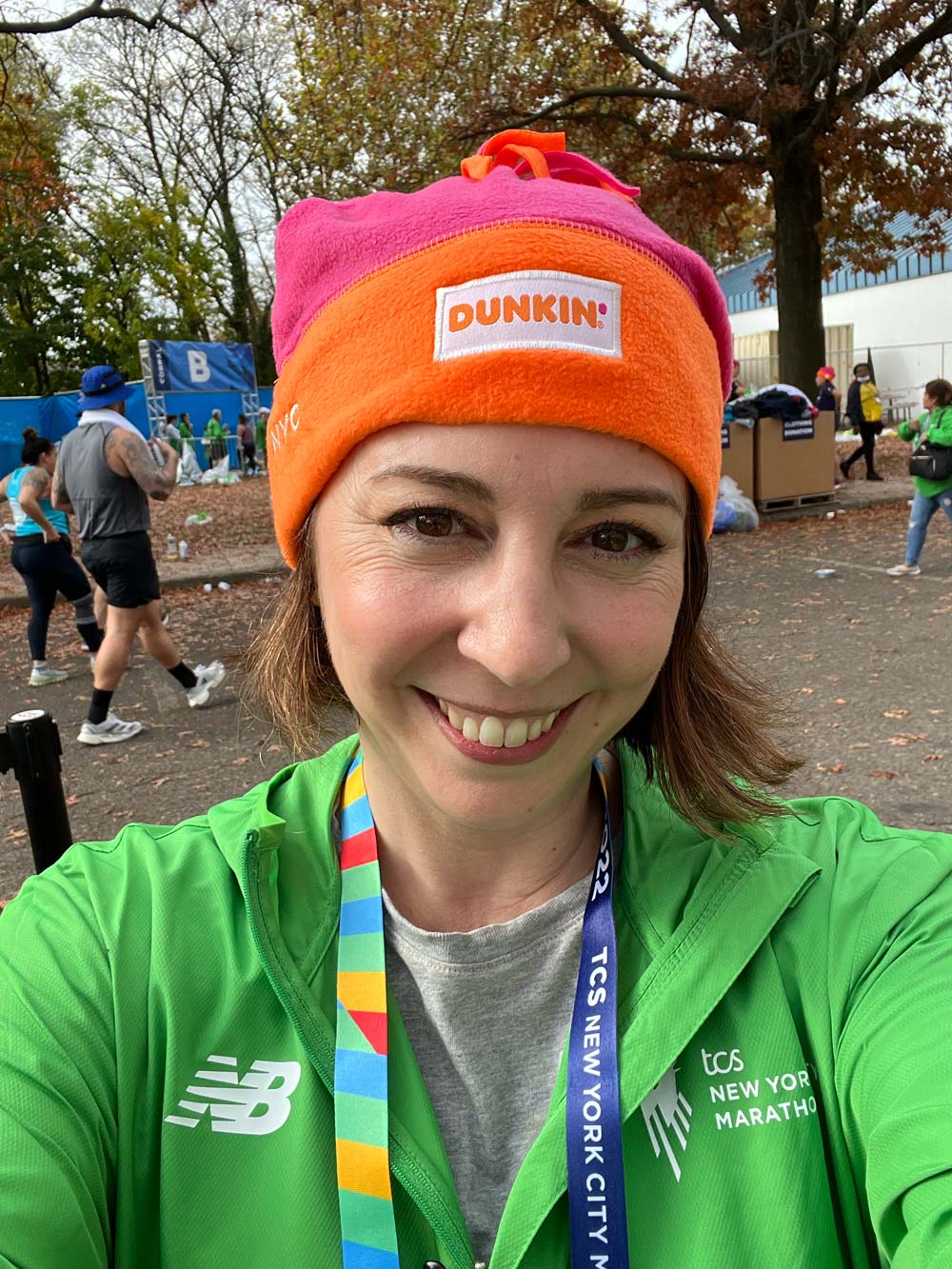 I completed my last qualifying race in November and I didn't hate it! The longest race I ran was a 10k, so I've got some definite leveling up to do. The race I volunteered to work at was the 2022 marathon and I was at the start line in Staten Island, handing out Dunkin' Donuts coffee (yep, the marathon runners were runnin' on Dunkin'). It was so inspiring to see people from all over the world, and surprising to me, most of them were closer to middle age or older.

So I'm gonna give it a go. I have eleven months to get in better shape and to try not to injure myself. I plan on joining a training program in the Spring, and I also started Orange Theory for some strength and cross-training.

2. Singing regularly for the first time since college #

I grew up playing the piano, but never really took to it. I'm thankful for the lessons as they taught me how to read music at the same time I learned how to read words. In high school, I decided to join choir because my friends who were in it were always getting out of classes to go perform at a local event or business. I liked choir enough that I later joined my college choir and was in the smaller group of Chamber Singers my senior year. Since then, I have only sang at karaoke, maybe once or twice a year. And now that I live in NYC, I don't even have a car I can belt out showtunes in.

I have missed singing a lot. I especially missed singing in a group and singing in harmony. I sing alto and love being in the middle of a chord but I could never find the right place to sing after college. Everything in NYC was looking for professionals or at the other spectrum, was meant for absolute beginners. I needed something in between, where I could be beyond a beginner, a bit rusty, but still challenged in a supportive environment. I finally found a great vocal school that has a pop choir, Krowne Vocal School. I was super nervous about my vocal abilities. Did I still know how to read music? Do I still have the range and vocal chops?

I found I did! It was so affirming to pick back up a skill I hadn't used in YEARS (not giving away my age here, but MANY MANY YEARS), and finding that most of it is still there. We don't ever totally lose things we have once learned. My voice isn't quite as strong as it used to be, but it's good enough. I also realized how therapuetic singing is for me. When choir was on hiatus during the summer, my mood was worse for it. It's a very effective form of stress release.

I was always terrified of singing solo back in the college days. I'm looking into taking some solo voice lessons with Krowne to work on better technique and to squash that fear in 2023.

Last month, we recorded one of our songs in a recording studio and the school released it on Spotify.

3. Publishing a theme in the Shopify Theme Store #

I planned on this taking about 6 months. It took a full year. Whisk launched on November 28, 2022. I write more about why I chose to take this project on in a previous post.

My goal here was to start my own business/agency and create a new revenue stream that doesn't rely only on time based efforts like client work. I had never taken on something this large by myself and completed it. It's such a huge upfront investment with little opportunity for feedback along the way. My first submission in July was rejected, which was a big disappointment. And then I overworked myself to the point of chronic neck and back pain from a herniated disc. It was 100% related to sitting at the computer for too long, for too many years. In August, I stepped away from the project entirely for a month from physical exhaustion and burn out. When I came back to it in September, I was determined to change my working habits. I now take breaks throughout the day, including a workout midday. I went through a round of physical therapy and am doing pretty well at keeping up with the exercises. I still have pain, but it's much more manageable. The theme itself is better because of the rejection and the feedback I received then, and from having the time away to gain perspective and regroup. I needed to come back at it fresh.

Besides designing and building the theme itself, I also had to design a demo store and I decided to create a fake olive oil brand for it which included brand and packaging design. It was like being in design school again! I even invented fake owners who were from a long tradition of olive oil farmers, and used a photo of my niece and her husband on the demo About page (shown below, how cute are they!?). There's also 57 pages of documentation, a marketing website/landing page, social media, customer support, etc. I've been a part of so many smaller teams and start-ups, that I've at least had exposure to all these parts of the business before. I'm just trying to nibble away at it all, and hope to grow to a place where I can hire more experienced help in some of these areas this year. For now, I have enough time to work on it all, and it's all been pretty fun. I'm even looking for some new client work to take on for 2023. I miss working with people. 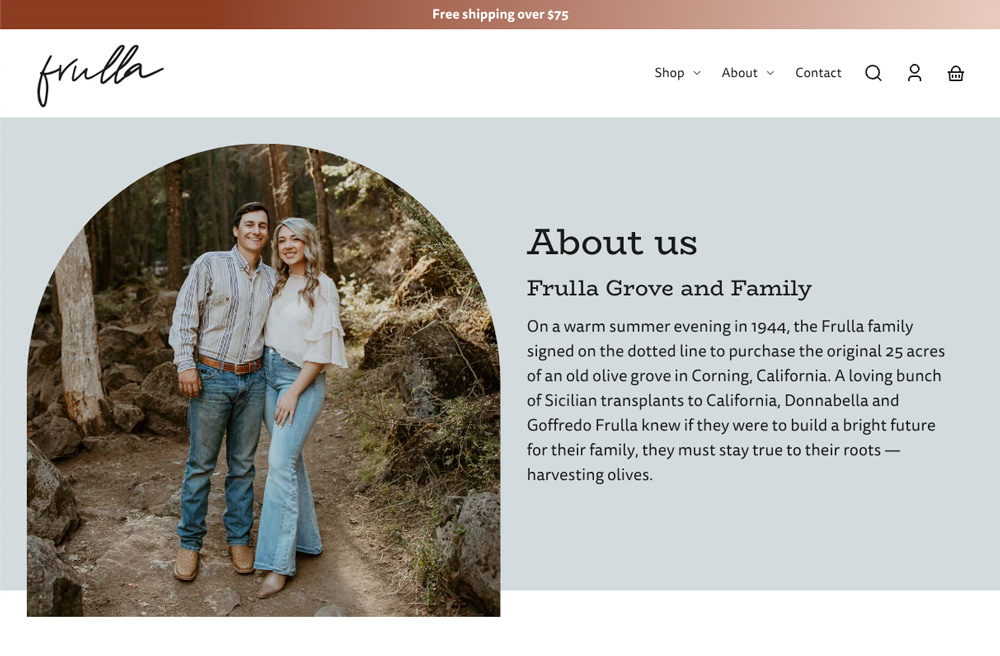 Maybe that's why I am enjoying the customer support part of being a Shopify theme partner more than I expected. It's so rewarding to see what other people do with something you created, and then super valuable to get to connect with these people directly. It has also reminded me how much I enjoy mentoring and teaching. That's definitely something I'm thinking about doing more of in 2023.

The top featured photo is of purple heather starting to bloom in August in Cornwall, England. One of my favorite places and photos from the year.